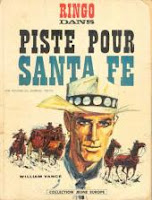 Ray Ringo receives from Wells Fargo mandated to protect stagecoaches before Indians and bandits and bring safely to their destination.

Ringo was a French-Belgium comic book series published from 1965-1978.

William Vance drew the Western series and wrote the first and final story.  Other copywriters were Jacques Acar, Yves Duval and André-Paul Duchâteau.  The series was published between 1965 and 1966 in between the Belgian and French issue of Tintin. The remaining episodes came out in Tintin Sélection.  Le Lombard began the albums in 1967 the albums and in 2004 a complete edition was published in the series Tout Vance.  The German First published came from MV Comix. More stories followed in Old Zack and in Zack Parade. The publisher Feest released two albums. 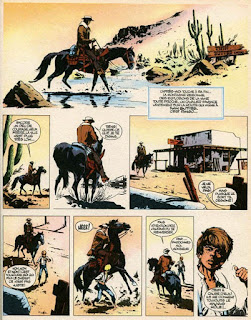 William Vance (William Van Cutsem) was born in Anderlecht, Belgium on September 8, 1935. He studied at the Academy of Fine Arts in Brussels and worked in the advertising industry.  He got started as a cartoonist by working as an assistant to Dino Attanasio. He received an appointment working on Tintin, where he worked as an illustrator and his first short stories and series were recorded.  He then worked on the comic book Bruno Brazil.

In 1967 the Belgian women's magazine Femme d'Aujourd'hui urgently needed a replacement draftsman for the currently playing episode of Bob Morane which required, he jump into in the short term, eventually taking over the adventure series. The collaboration with Femme d'Aujourd'hui lasted until 1983 and brought in addition to the individual works SOS Nature and Mongwy and more series like the seafaring adventure Bruce J. Hawker.

He celebrated his greatest success with the agent series XIII, which he created along with Jean Van Hamme. Among his most important collaborators included his wife Petra as a colorist, his brother Felicísimo Coria and René Follet.  He lives in Spain and in 2010 went into retirement, as the first signs of Parkinson's disease became noticeable.