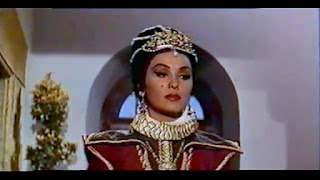 Legendary Circus owner, performer and actress Moira Orfei died overnight in Brescia, Italy. She was 83. Orfei was found in her mobile home by her relatives this morning. The circus troupe was on tour and a scheduled performance today and then in Milan will go on. Moira was born in Codropio, Undine, Italy on December 21, 1931. She was born into a circus family with her father Riccardo Orfei, was known as the famous clown Bigolo. Her mother was Violet Arata, brothers Paolo, a juggler and acrobat, and Mauro, an acrobat on bicycles. Also cousins, actress Liana Orfei, and Graziella were both circus performers. Moira appeared in two Euro-westerns:  Samson and the Slave Queen (1963) and The Two Sergeants of General Custer (1965).
Posted by Tom B. at 9:14 AM