Larry Yuma is the title character of an Italian western comic strip series created by Carlo Boscarato and Claudio Nizzi. Larry Yuma, a gunman whose gaze was constantly hidden under the brim of his cap. Larry Yuma is a Lone Ranger riding the desolate landscapes of the American West in search of injustice. His features include a hat pulled down over his eyes, a cigar he spends his time casually lighting, his multicolored serape casually resting on the right shoulder, When you see Larry Yuma you irresistibly think of Clint Eastwood in his Spaghetti westerns. He also possesses the gift of appearing when you least expect it in the middle of a difficult situation.

At the end of each adventure, Larry Yuma would turn on his dusty track and ride away into perpetual loneliness. 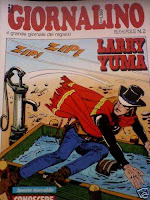 The comic is strongly influenced by the Italian Spaghetti Western cinema.

Carlo Boscarato was born on May 9, 1926. Boscarato did his first comic in 1948, when he was assigned to do an episode of 'Jim Brady' for the publishing house AVE. This began a long collaboration with the magazine Il Vittorioso, that didn't end until 1967. Boscarato mainly did historical comics, but also the series 'Axel Lind'. From 1953 to 1959, he drew several caricatures and comics for Lo Scolaro. In 1967 and 1968 he briefly worked at the Studio Dami, where he did 'Dickson, Pilota della Grande Guerra'.

After his time with Il Vittorioso, Boscarato turned to Il Messaggero dei Ragazzi, where he did several stories until 1975. He also began a longtime collaboration with Il Giornalino, a magazine for which he created series like 'Giorgio Reli', the western 'Larry Yuma' (scripts by Claudio Nizzi) and the humorous 'Nico & Pepo'. In 1979, he adapted Stevenson's 'Treasure Island', again scripted by Nizzi. Carlo Boscarato worked for Il Giornalino until his death on June 12, 1987.

Claudio Nizzi, widely known as a master of Italian strip cartoons, was born in Setif (Algeria) in 1938. and started his script career on the pages of "Il Vittorioso", in 1963. After that, he experimented with almost every genre: from African adventures (with "Steve Damon") to sea voyages (with "Captain Erik"), from abridgements of the literary classics, "I promessi sposi", "L'isola misteriosa", "Un capitano di quindici anni" to westerns (his most popular strip before Nick Raider was a western, "Larry Yuma", a gunman whose gaze was constantly hidden under the brim of his cap), and even love stories and humorous strips. But, of course, detectives were bound to have a place in his career as well, and so you meet Lieutenant Mario or the funny Rosco & Sonny, the protagonists of adventures that are often more romances than detective stories. Thirty years ago or so, Nizzi started to alternate with Gianluigi Bonelli writing the scripts of Tex, a task he has taken on with great skill and mastery for many many years. In 1988 Nizzi created , the first detective story published by Sergio Bonelli, which he also supervised until 1992, when, due to the heavy commitment required for the writing of the Tex stories, Nizzi appointed Renato Queirolo as the supervisor of the series, while continuing to write stories for his new hero.
Posted by Tom B. at 5:45 AM