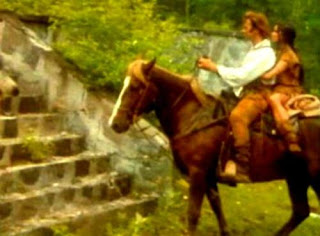 This made-for-TV drama, based on a historical novel by James Oliver Curwood, concerns Nepeese (Neve Campbell), a young woman whose mother was an Canadian Indian and father was a white American. Caught between two cultures but fully embraced by neither, Nepeese finds strength and companionship when she befriends Baree, a half-wolf, half-dog. Both Nepeese and Baree find themselves in jeopardy when they encounter Taggart (Lorne Brass), a ruthless trapper who makes no secret of his desire for Baree's pelt and Nepeese's body. However, they both find a champion in Paul (Jeff Fahey), a naturalist who protects Baree from hunters and wins the beautiful Nepeese's heart. ~ Mark Deming
.
This Canadian, French made to TV movie, part of the Tales of the Wild series was shown on French telelvision on December 30, 1994.