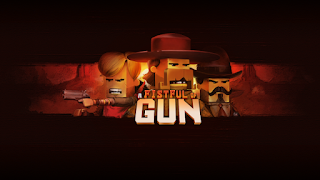 You play as one of 11 psychopathic gunslingers who are resurrected by a shaman to stop railroad baron Clayton Boom from finishing his track to Hell. You have to travel 14 miles across the wild west to stop Boom, with each mile being represented by a challenge, which is usually shooting cowboys in one vs. many scenario.

Each playable character has their own weapon and with a unique control set-up. Some can only be played on a mouse and keyboard, others on a controller – the rife requires mouse aiming, the shotgun needs controller buttons, while a revolver requires two analog sticks.

Fistful of Gun isn’t just designed for single player, though. In fact, these various control set-ups also serve to allow for up to nine people to enter its multiplayer modes on the same computer. You can also play with or against people online. in co-op or versus modes