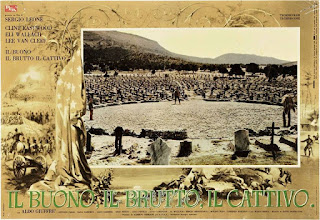 An initiative is underway in Burgos in the heart of Castilla for 2016 marks the 50th anniversary of the filming of the movie "The Good, the Bad and the Ugly" in which some of his scenes were shot in this town, including the end duel in the graveyard. The band Metallica has used in some of his concerts the song called "The Ectasy of Gold" by Ennio Morricone. Along the Arlanza Valley route there are four scenarios that were used by Leone. The Cultural Association Sad Hill is recovering the original Sad Hill Cemetery used in the film (among other actions) and dreams of having Metallica take part in the celebration. Sergio García, one of those responsible, is waiting for a response to the invitation to the producer, actor Clint Eastwood in California hoping that it returns to the set and that it will already may be restored but at this hour no answer has been received and there is speculation that Clint could even be a surprise to everyone.

There is also a possibility of a proposal to the maestro Ennio Morricone to also participate in the celebrations and govern a possible concert with the Symphony Orchestra of Burgos. This is all speculation at this time. Also contacted to participate in the celebrations, is the daughter of the artistic director of the film, Carlo Simi, who possess material such as original drawings and prospects of setting decor designed by her father and the assembly of the cemetery that was his responsibility in 1966. The widow and daughters of Sergio Leone are also being contacted to participate and receive honors. People who work with this project are mostly volunteers from different cities and towns in the region: Santo Domingo de Silos, Salas de los Infantes, Carazo, Contreras, Hortigüela, Covarrubias, Hontoria and Barbadillo where expected to help as well as other more distant places such as: Bilbao, Valladolid and even the U.S.A.

This is a project that will bring positive results to everyone and everyone needs to use advertising to a good result. For better coordination they have created groups of volunteers and divided them into hours scheduled on the weekends for the excavation and cleaning of center square of the cemetery and its surroundings where there will replace the 4,000 graves and participants should inform and confirm in advance to the organizers there willingness to participate. Their presence and to to work will not disrupt the progress of the project of Sergio García who explains that he has obtained official permission from the authorities and that the rediscovery of the cemetery is increasingly fascinating and their biggest challenge is at the beginning of 2016: Rebuilding 4,000 graves Leone had constructed and to find the location the grave of "Arch Stanton." The Sad Hill Cultural Association expects to finish the cemetery and the graves in mid-summer 2016 in the month of July. 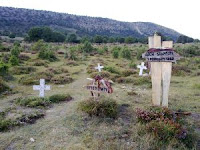 People all over the world who wish to volunteer, but knowing that this would be impossible, they have created a different form of participation and assistance and for those who are interested in cooperating with donations of 15 Euros for the project or 20 Euros and sponsor a tomb. For this, the association is organizing a fantastic initiative "Godfather of a Tomb" which, with a deposit of 20 Euros, will raise funds for the cause and in return for the donation the donor will have their personalized headstone symbolically with your personal data. Money is needed for the logistics of materials and machines that need to do the job. Those interested should contact by e-mail at: acsadhill@gmail.com There is also the possibility of becoming a partner of the project for a fee 20 Euros and from this the partner will receive the entire schedule of meetings, concerts, workshops, organization's publications etc.

To participate as a partner or sponsor a grave: ES98 3060 0002 12 2252730722 of Caja Rural (Caja Viva) on behalf of the Cultural Association Sad Hill with CIF G09559691 should indicate the name and surname. In addition to the scene of the Cemetery "Sad Hill ', other sequences of
“The Good, The Bad and the Ugly” were filmed in the province of Burgos There were scenes filmed in the San Antonio Mission, The Betterville prison camp and the battle at Langstone bridge. 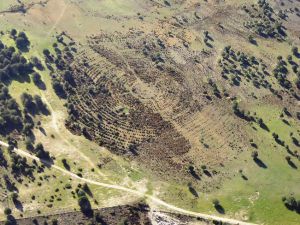