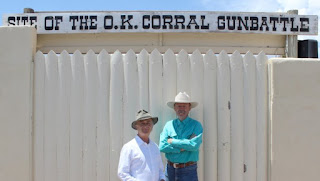 From Custer’s Last Stand and the Battle of Little Big Horn to the gunfight at the OK Corral and death of Jesse James, this is a history of the West like no other.

Tony Robinson's Wild West uses exclusive, never-before-seen 3D stereoscopic photographs to expose the untold story of the Wild West, and reveal the true stories of the men and women who tamed the American wilderness. This three part documentary charts the 50 year period that began at the end of the American Civil War in 1865, when all the western territories in America were opened up to be exploited.

Throughout the series, Tony, a huge fan of western movies, investigates the clashes between the native American tribes and pioneers, namely the famous ‘Last Stand’ of General Custer at Little Big Horn. He examines the infamous western bandits, including Butch Cassidy and Jesse James, often glorified in Hollywood’s latter-day spaghetti westerns, to find out if the films he grew up with relate to the reality of the Old West.

Finally Tony looks at how the west was won, focusing on the pioneers that capitalized on the opportunities of the West, one of which was the renowned Buffalo Bill, the world’s first global superstar.