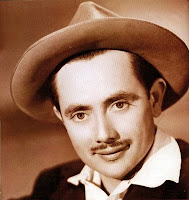 Mexican actor and singer Ferrusquilla died November 6th of a stroke in Mazatlan, Mexico. He was 96. Born José Ángel Espinoza Aragón Espinosa on October 2, 1919 in Choix, Mazatlan, Sinaloa, Mexico. He appeared in over 95 films including 25 westerns in Mexico, Spain and the U.S.A. including El tunco Maclovio, Rio Lobo, Chisum, Big Jake, Two Mules for Sister Sara and the Euro-westerns Four Bullets for Joe (1963), Viva Maria! (1965), The Warriors of Pancho Villa (1966) and Guns for San Sebastian (1967). He was also well known as a singer and the father of actress Angélica Aragón [1953- ].
Posted by Tom B. at 10:44 AM