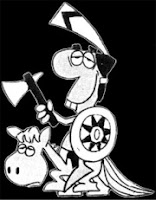 In 1961, Bruno Bozzetto devised for Carousel "Unca Dunca", a series of commercials for a brand of boilers and air conditioners made in Veneto.  The protagonist is a wild-eyed Indian, inspired by western movies that constantly repeats the phrase "Augh, beeello!".  Fully in line with the style that would make Bozzetto famous throughout the world, "Unca Dunca" is a short cartoon very essential, based on simple designs and linear.  Apart from the phrase catchphrase of the protagonist, the spot is completely free of dialogue.  The images are accompanied by an effective and engaging soundtrack, conceived and performed by Enzo Whittaker and Paul Tomelleri.