We continue our search for filming locations for “The Mercenary”. After Paco’s performance he’s collecting money off the ground of the bullring that was thrown to him and the dwarfs. As they begin cleaning up when suddenly Curly appears on the scene. Paco suddenly notices him approaching and stops dead in his tracks. Two of Curly’s men flank Paco, one with a rifle and one with a bolo. As Paco turns to run, he’s brought down by the bolo thrown around his ankles. Suddenly two shots ring out and Curly’s henchmen fall dead. Curly spins around to see who fired the shots and Kowalski walks down from the stands toward him. He demands that Curly give Paco a chance to defend himself. He gives each of them a rifle and a bullet He tells them to walk in opposite directions and on the third stroke of the bell they turn and shoot. Curly shoots Paco in the soldier and then sees blood dripping from the carnation in his lapel. He falls and dies. Sergei marches Paco out of the arena at gunpoint while Columba helplessly watches. Sergei makes Paco wash his face in a watering trough ties his hands and drags him behind his horse to the headquarters of the Mexican 51st Regiment for the 3,.000 pesos reward. Paloma tells two of Paco’s men, “Let’s beat them there” and they ride off in a wagon. 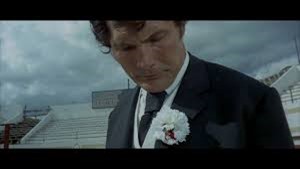 This was filmed in the bullring in Manzanares el Real, Madrid, Spain.