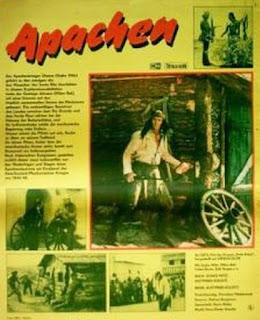 Apaches, a 1973 East German Indian film directed by Gottfried Kolditz and starring Gojko Mitic who co-wrote the script with Koditz. The film takes place in Mexico in 1846. A man named Johnson, a American sociologist, discovers an outcropping of precious metals in the Membreno-Apache Reservation. He plans on annexing the area to the U.S. then he will get rid of the Indians by murder or driving them away. The company he is working will benefit from the mineral rights and he plans to profit from the sale of Indian scalps.

Director Kolditz and Mitic when writing the script based it upon original documents and reconstructed the imagined atmosphere of the Mexican War (1846-1848) at its beginning. During this time small groups of American scouts were sent to Mexico by large companies to plot the conquest of targeted regions. These infiltrators organized provocations with the Indians and instigated conflicts and then asking for Federal troops to disband the Indians so they could move in and take over the property.
Posted by Tom B. at 4:09 PM