Jutak was a representative of the “Good” Indian in the old American West.. A friend to the white man who fought against the evil white-eyes and redman that roamed the West. He was sometimes joined by his trusted friends Tiger Jack Bonelli, Blue Belle, Black who wore a polka dot bandana on his head and the old tracker Trump. Jutak was a defender of right and fought old west criminals and traitors of the U.S. Army. 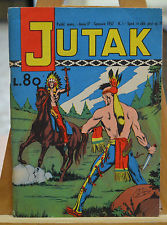 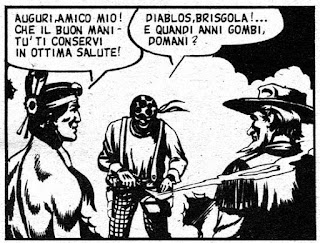 Jutak was drawn by Pini Segna from 1956-1957. It was first seen as a supplement in “Adventurous Jungle” and then became in independent series in 1957, with complete stories.
Published by Edizioni Metro in Milan, Italy. 12 issues were released on a monthly basis beginning in June 1956 until May 1957. The character reappeared in the 1970s. Filled with stereotypes of the 1950s the cartoon character was crudely drawn and the stories filled with much violence and action. 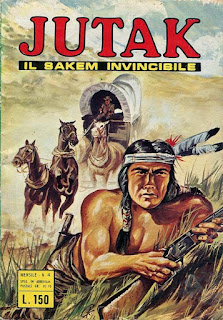 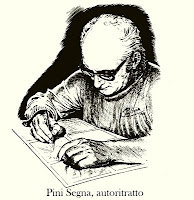 Born in Florence, Pini Segna graduated from the Academy of Fine Arts in 1944. He settled in the Langhe area during the second World War and has lived there for the rest of his life. In 1946, he debuted with the Vincenzo Baggioli scripted 'Agente K6', followed by 'Il Giustiziere Mascherato', for the publishing house Nuova Aurora. In the following year, for Editoriale Sportiva, he made 'Penna Azzurra'. Starting in 1948, he worked as an illustrator of 'Saetta' and 'Volpe' stories for Alpe, and as a collaborator of Arc publications like 'Pantera Bionda', 'Tom Mix' and 'Tom Bill'.

In 1949, he began to work for the Albi dell'Intrepido collection. In the early 1950s, he drew series like 'Dix', 'Tornado Bill', 'Carabina Jones' and 'Gim Falco' for Marino Tomasina Editore, and in the late 1950s, he did art for 'Dick Montana', 'Gill Bart', 'Glory Men', 'Giungla Kid' and 'Dakota'. Between 1965 and 1977, he was mainly active as an illustrator of 'Mandrake', 'L'Uomo Mascherato' and 'Kriminal stories for Editoriale Corno, as well as 'Akim' for Editions Aventures et Voyages.

Between 1977 and 1982, he illustrated various stories with 'Zagor' for Daim Press. From 1990 to 2007 he was a collaborator of the local monthly Dogliani e le sue Langhe. He was in a car accident in the spring of 2007 and was hospitalized. A few weeks later he suffered a stroke and has since lived in a nursing home in Salmour. He passed away in September 2012.