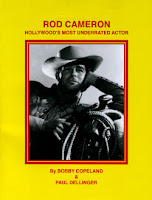 Born in Canada, Cameron starred in two excellent Republic serials, G MEN VS. THE BLACK DRAGON and SECRET SERVICE IN DARKEST AFRICA, both of which had him battling the Axis during World War II. Then came a brief series of B westerns for Universal in 1944-1945 with Rod filling the vacancy when Johnny Mack Brown exited the studio for Monogram Pictures.

As the years rolled by, there were many more westerns. And in the 1950s-early 1960s, Rod was a prolific television hero, starring in three TV series produced by Revue/MCA-TV.

Roughly half the book is a Cameron biography and includes a filmography, film details, comic book series, etc. and there's many B&W photos, lobby cards and posters. There's a section with some thoughts and speculation about why Cameron wasn't chosen to star in a B oater series for Republic Pictures. And there's info on his marriage ... divorce ... and the marriage to his mother-in-law. The other half of the book has single page profiles on lots of heroines and leading ladies who worked with Cameron over the years.
Posted by Tom B. at 5:48 AM