We continue our search for the filming locations for “Bullets Don’t Argue”. Pat chases Santero on horseback and shoots his horse sending him rolling. The outlaw takes refuge in some nearby rocks and a shootout takes place until Santero drops the saddlebags containing the money. Both men are now out of bullets so Santero jumps Pat and pulls a knife. After a short fight Santero stabs himself with his own knife and dies. Pat picks up the saddle bags and returns to the ranch. 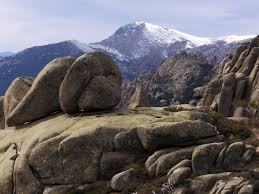 The chase and fight sequence was filmed among the rocks in Hoyo de Manzanares, Spain. 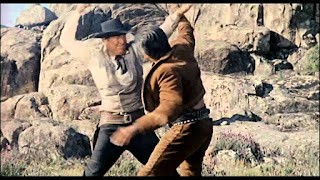