In the Footsteps of Winnetou 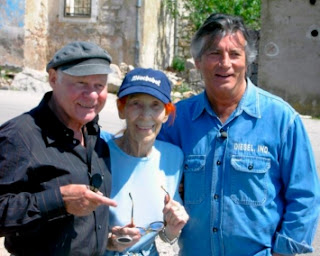 "In the Footsteps of Winnetou" brings back the myth of the Winnetou films. The production company Kalema Media leads "Winnetou" Pierre Brice and "Sam Hawkens" Ralf Wolter after more than 40 years, back to the original sites of the legendary films. Impressive pictures show scenes such as the Plitvice Lakes (the legendary "Silver Lake"), the Mali Alan-rock massif (the characteristic Goldberg "Nugget Tsil"), the Zrmanja Plateau (site of the Apache-pueblos), the Krka Waterfalls (the cascade, where once important movie scenes were shot) and other locations are visited. Besides Brice and Wolter other members of the party remember the "great time of Winnetou". Among them, "Nscho-chi" Marie Versini, the dynamic Götz George, the racy Dunja Rajter, producer Horst Wendlandt and his son Matthias who was responsible for the production, and composer Martin Böttcher, whose melodies Winnetou and Old Shatterhand are part of his legendary portfolio of compositions. Winnetou and his loyal companions are revived in this unique cinematic documentation.