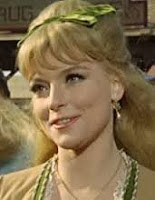 Danish actress Ann Smyrner died in Andalusia, Spain on August 29th. She was 81. Born Rohde Nielsen on November 3, 1934 she changed her name in 1947 to Hanne Smyrner. Discovered by talent scouts in 1950 she made her stage debut in ‘Aladdin’ to mixed reviews. After attending acting classes at the Aarhus Theatre School from 1955-1956 she received a 5-year contract at the Deutsche Film Hansa. She went on to appear in 72 films among them "Drillinge an Bord” (1959), “Reptilicus” (1961) and “Code 7, Victim 5” (1964). In 1970 she became ill and was hospitalized. Out of the public eye she was forgotten by the film industry. She quit her film career and moved home to her parent’s home in Skåde near Aarhus. Here she became spiritualist and wrote articles and columns for Danish newspapers and was often heard on the radio. After her father’s death she and her mother moved to Andalusia, Spain in 1987, where she often gave talks and lectures on her spiritual beliefs and travels during her acting career. Anne appeared in only one Euro-western: “Beyond the Law” 1967) with Lee Van Cleef in the role of Betty.
Posted by Tom B. at 10:36 AM