The two heroes are sympathetic and nervous Pete, a bank robber West, and Chett, an acrobat flyer. Pursued by the police, Pete goes to El Paso with intention of moving to Mexico, and forces Chett to take him in his plane. There they fall into the hands of the Mexicans who force them to work for them as mercenaries, and, the surprises of the events that occur at breakneck speed, passing from one side to another, living during the Mexican Revolution in a foreign country, happy full of vitality, with a zest for life, courage ... and a desire to fill their pockets.

Pete is an outlaw, a specialist in handling explosives, who claims to be interested in only one thing: money. Chett, is an aviator and a dandy acting for art's sake.

It seems that everything between them, but the thunderous passage of history (in this case the Mexican revolution in the early twentieth century with a colorful bunch of heroes, scoundrels and murderers) eventually joins them again and again. Sometimes in friendship and occasionally the contrary, which reignites into fireworks, in this case the Mexican style. 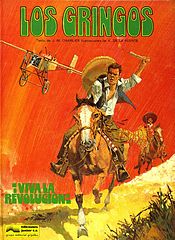 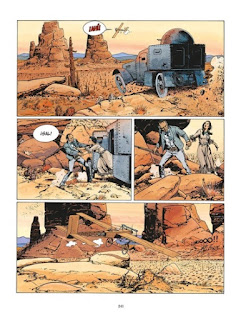 Victor de la Fuente was born in Ríocaliente, Spain on April 12, 1927 and started his comics career in Adolfo López Rubio's studio in 1945. In this period he worked for Spanish magazines such as Chicos, Flechas y Pelayos and Zas. In his mid-40s he moved to South America, first to Cuba, then to Argentina and Chile, where he signed a contract for Editorial Zig Zag. In 1957 he became director of the El Peneca magazine and founded his own advertisement agency.

In 1961 he returned to Spain, and subsequently worked for local publishers as well as British ones including Fleetway and DC Thomson. In 1968 he started a collaboration with the French magazine Pilote, published by Dargaud, with the series Les diamants sanglants ("The bloody diamonds"). The following year he began the western comic Sunday, written by Víctor Mora and published by Spanish Selecciones Ilustradas.

From 1969-1971, de la Fuente wrote and drew the heroic fantasy series Haxtur for the Spanish magazine Trinca; in 1971 he also drew a single story for American publisher Warren, "I Am Dead, Egypt. Dead", written by Doug Moench, which appeared in Eerie #25. The story won the 1972 Warren Award for best story. In 1972 he created, again for Trinca, the post-apocalypse series Mathai-Dor, which remained unfinished due to rights problems. In the same year he moved to France, and executed the erotic-western series Mortimer for Italian publisher E.P. In 1973 Haxtur won two awards at the Trieste and Genoa comics festivals in Italy.

In 1974 he created another western series, Amargo, for Hachette. In 1976 he took part in the comics adaptation of the Holy Bible and the history of France for Larrousse. In 1977 he collaborated with the Belgian magazine Tintin and, in 1978, he created another heroic fantasy character, Haggarth, for the Belgian magazine A Suivre. In 1979, he began the long western series Los gringos, written initially by Jean-Michel Charlier and, from 1992 onwards, by Guy Vidal. In 1980 de la Fuente won the Yellow Kid Award in Lucca.

Jean-Michel Charlier born on October 30, 1924 in Lieja, Belgium, was probably the most important writer of realistic adventure comics of the past century. What René Goscinny was for humorous comics, Charlier was for realistic comics. Although he earned fame from his writing abilities, Charlier started his career as an illustrator. He joined Spirou magazine in September 1944, where he did some aviation illustrations, as well as a comic about gliding, that he sometimes signed with Flettner.

Charlier got the chance to further showcase his love for airplanes two years later, when he took on writing the 'Buck Danny' series, illustrated by Victor Hubinon. Georges Troisfontaines, chief of the World's P. Press agency that provided the comic, had already written the first pages of 'Les Japs Attaquent' when Charlier took over. At first, Charlier also assisted Hubinon in the artwork, but after a few episodes, he focused solely on the scenarios.

Charlier always used actualities in 'Buck Danny', which often got him in trouble with the French censorship board of the 1950s. At the time, Charlier also worked a lot with other artists of the World Press agency, like Albert Weinberg, Eddy Paape, Dino Attanasio or Albert Uderzo. In 1951, Charlier co-launched the legendary 'Belles Histoires de l'Oncle Paul' series, where many young artists made their debut. Until 1954, Charlier wrote several of these historical stories, before handing over the writing to Octave Joly. In the 1950s, Charlier wrote numerous series in Spirou besides 'Buck Danny', like 'Kim Devil' (art Gérald Forton), some episodes of 'Jean Valhardi' and 'Marc Dacier' (both art Paape) and 'Thierry le Chevalier' (art Carlos Laffond). Another highlight of his work for Spirou is the scouting series 'La Patrouille des Castors', illustrated by MiTacq.

Along with Albert Uderzo and René Goscinny, Jean-Michel Charlier started the Édifrance agency, specializing in communication and comics. Charlier and Goscinny were also editors in chief of Pistolin magazine from 1955 to 1958, before starting Pilote magazine themselves in October 1959. Charlier launched three successful new series in Pilote, 'Tanguy and Laverdure' (with Uderzo and later Jijé), 'Barbe-Rouge' (with Hubinon) and 'Jacques le Gall' (with MiTacq). 1963 is also a highlight in Charlier's career. That year, he created the best European western comic, 'Blueberry', illustrated by Jean Giraud. In 1985, Charlier deepened the character of this cowboy, by exploiting his younger years in the spin-off 'La Jeunesse de Blueberry' (art by Colin Wilson).

While writing his several success series, Charlier wrote several lesser known comics. Most notable are the historical biographies he made with Victor Hubinon ('Surcouf', 'Jean Mermoz', 'Tarawa'), but he also made scenarios for Martial ('Alain et Christine' in Libre Junior, 'Rosine' in Pistolin), Raymond Poïvet ('Guy Lebleu' in Pilote), Aldoma Puig ('Brice Bolt' in Spirou), Christian Rossi ('Jim Cutlass') and Victor de la Fuente ('Los Gringos'). Charlier's scenarios stand out for their exciting and well documented storylines. Interesting about his work is his ability to illuminate dramatic stories with comical, slapstick-like events, like the clumsiness of Sonny Tuckson in 'Buck Danny' or the gluttony of Tapir in 'La Patrouille des Castors'. Suffice it to say that Charlier worked with virtually all great French comics artists of his day. All of his works remain a landmark of European comics.