We finish our search for the filming locations for “Bullets Don’t Argue”. Upon returning to the Goddard Ranch, Pat thanks Captain McKenzie for coming and he tells him George is the one who brought them. McKenzie asks Pat about the bandits and he tells them they’re all dead and he’s returning to River Town to return the money. He suggest George stay with Agnes and Mike and help them rebuild the ranch. Then Pat rides off and the cavalry returns to their post.

The ranch scene was filmed in Hoyo de Manzanares, Spain. 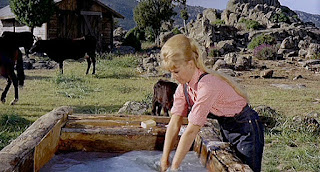