Petra Goes to the Movies 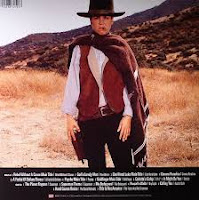 Petra Haden (1971) is an American violinist and singer. She is or has been a member of several bands, including That Dog, Tito & Tarantula, and The Decemberists; has contributed to recordings by The Twilight Singers, Beck, Mike Watt, Luscious Jackson, Foo Fighters, Green Day, Queens of the Stone Age, Weezer, The Rentals, Victoria Williams, Yuka Honda, The Gutter Twins, and Cornelius. She is the daughter of the jazz bassist Charlie Haden; the triplet sister of bassist Rachel Haden (her bandmate in That Dog) and cellist Tanya Haden (married to singer and actor Jack Black) with whom she has performed as The Haden Triplets; and the sister of bassist-singer Josh Haden, leader of the group Spain.


Biltmore sent me an e-mail telling me that Petra released a new album in January of this year called Petra Goes to the Movies, with several European film titles included among them “A Fistful of Dollars”. I’ve included a link for the entire album, ‘Fistful’ starts at the 47:58 mark.