Shooting a Coca-Cola commercial in Almeria 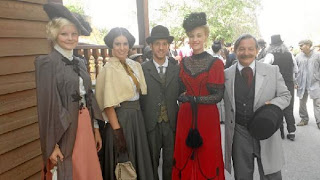 In early August, the Catalan agency representing the Actor's Gallery summoned several screen tests in Almería looking for extras which they were casting for an ad for the multinational company Coca-Cola which it intends to show at the end of the year. The shooting after Tabernas will be conducted in the Port of Barcelona, ​​where they have recreated an American 1850 City market.
According to some extras, the commercial is about the discovery of the secret formula of the popular drink.
There were a total of 1,400 Almerians which attended the various casting calls for extras, and in Tabernas ans Turre. Finally, 190 were selected for the shooting, including children, men and women.
The shooting took place on Sunday August 25 at Mini Hollywood (Oasys Theme Park), an all- day marathon which began with the call made for the first team at three-thirty in the morning at the Hotel Elba, where the film crew was staying. A second group was called for at four-thirty and the third, consisting only of men, at five-thirty. A day earlier, on Saturday, there was a dress rehearsal of the squad.
Upon arrival at the facility, the extras then spent time on set-ups and configuration, classified into three groups, representing high, medium and low society.
About eight o'clock, on completion of the makeup of the one hundred ninety extras, filming began, with children dressed as paper boys and some blond girls with ringlets. Among the adults, they were dominated by thin people, especially in the middle and upper classes, with light eyes and blond hair.
Mini-Hollywood thus became a bustling American city, where you could see florist carts, vegetable stalls, riders, carriages, women and men walking, a doctor, a reverend, bankers, travelers, traders, etc. More than ten times they repeated each of the scenes, looking for the best takes.
Noon was the time set for a rest, since the western town was then opened to the public and was the time set for the famous professional stunt specialists and dancers who are usually in view to the many tourists who at that time were in the barroom.
Before the noon meal, which was prepared in the style of 'self-service' by the restaurant Grupo Hoteles Playa is in the village, there was time to then continue the shoot.
The lead actor was an Abraham Lincoln type with beard, white apron, red tie, suspenders and a glass of Coca-Cola in his hands, the star of the commercial.
Posted by Tom B. at 7:34 AM