We continue our search for filming locations for “Death Rides a Horse. After Bill leaves Ryan in the desert he continues on to a small Mexican village and the hideout of Walcott and his gang. Bill takes a drink at the local cantina. While there he recognizes one of Walcott’s henchmen, Paco, by an earring he wears. He challenges the man to a duel and kills him. Before he can escape he is captured by some of Walcott’s men and held prisoner until Walcott and the rest of the gang return. Walcott arrives with the money from the bank robbery and they hide it in a stable. They then confront Bill and torture him trying to find out where Ryan is. After he lies to them and tells them where they can find him, they bury Bill in the ground up to his head. After the gang leaves on the false trail, Ryan arrives killing several of Walcott’s men left at the hideout. Ryan instructs the villagers on preparing a trap for Walcott and his men. When Walcott returns they assault the village and face Ryan and Bill the following morning. Once the gang is eliminated Bill forces Ryan to face him in a duel as he now knows Ryan was once part of the gang. Ryan refuses and does not even load his gun with the single bullet. Bill uses his bullet to save Ryan from a sniper hiding in the church bell tower.

This scene was filmed at a set in La Salinillas which is only rubble today. The set was used for several films and grew over the years as buildings were added when additional films were made. One of the earliest films to use the location was “The Bounty Hunter” (aka “The Ugly Ones”) starring Tomás Milian and Richard Wilder. 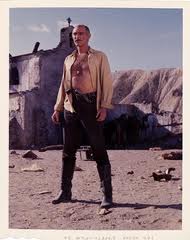