Who Are Those Gals - Isabella Biagini 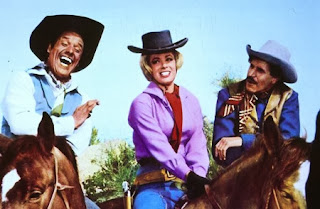 Concetta Biagini was born in Rome, Italy on December 19, 1942. She debuted in childhood as a radio actress and advertising model. At 14 she entered the Miss Italia competition, and in the same year made her film debut in a minor role in Michelangelo Antonioni's “Le Amiche”. Later in the 1960s Biagini worked in radio and television and posed for many fotonovelas. On the small screen she achieved some success not only as a showgirl but also as talented imitator; on the big screen, despite numerous appearances, her roles were usually stereotyped. In recent years Biagini has been an advocate for the homeless and those living in poverty in news columns a condition in which she actually lives. Her daughter Monica died of cancer in 1999.

Appearing under the pseudonym Isabella Biagini she appeared in “Don’t Sing Shoot” a TV musical western and was signed to appear in “Casanova West” a 1967 western that never materialized.