Who Are Those Guys? - Ettore Bevilacqua 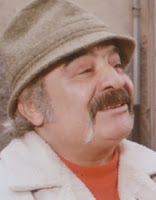 Ettore Bevilacqua was born on March 13, 1918 in Montecarotto, Ancona, Marche, Italy. Ettore’s parents along with his four brothers and sisters moved to Rome when he was 12 years-old. Ettore fought in Yugoslavia during World War II and was almost crushed by a tank. Later he came into contact with the world of film making through the ranks as an usher at the Scalera Film Theater and later became a coach of many actors and confidant of Federico Fellini and became his personal trainer. A character actor, he appeared in fourteen films and TV appearances from his first appearance in “The Bicycle Thief” in 1948 until 1974. He worked almost exclusively with Fidani and like many character actors little has been published about their lives. Ettore appeared in only one Euro-western: “Il bandolero stanco” (1952). Bevilacqua passed away on February 28, 1979 in Rome, Italy. He was only 60 years old.