Who Are Those Gals? - Nevenka Benković 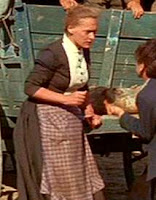 Nevenka Benković is a stage, film and TV actress from the former Yugoslavia. She appeared in at least one stage performance, that being “Žrtva na grobu” in 1955. Her first credited film was in “The Siege” (1956). She would go on to appear in at least 15 films and TV appearances from 1956-1977 as a character and supporting actress. Among her film performances was one Euro-western “Frontier Hellcat” with Elke Sommer, Stewart Granger and Pierre Brice, where she played a settler woman. Like so many of the European supporting players little if anything other than a list of appearances is known.