THE OIL, THE BABY AND THE TRANSYLVANIANS 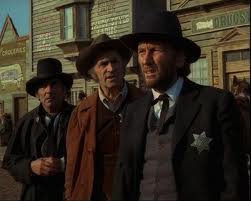 The Oil, the Baby and the Transylvanians is the third part of a fairly successful Romanian trilogy about three Transylvanian brothers, their families, and their companions in frontier America, on the Great Plains. Set in the 1880s, the drama, comedy, and perhaps appeal of the film comes from the characters' difficulty in adjusting to the American rhythm and lifestyle.

The youngest of the Brad brothers, Romulus, and his American fiancée, June, are expecting a baby. The wedding celebration is eagerly anticipated by all the family and organized according to ancient Romanian customs.

Meanwhile the middle brother John, who is honest, courageous, and fast on the draw, is held in increasingly high esteem by the townsfolk as he faces down a series of bullies and hoodlums, which sets up several showdown scenes. Eventually John is elected sheriff. He hunts these "Wanted" criminals to subsidize Romulus' decaying ranch

Traian, the eldest of the three brothers, goes looking for water for his cattle and passes through the land of the Orbans, who are ironically Hungarian-Transylvanian farmers. The Orbans and Brads forge an important alliance and friendship against outside danger and violence. However, instead of finding water on his land, Traian finds oil. But will the promise of riches corrupt the brothers and tempt them away from their new home?