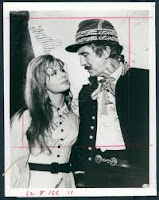 Patrick O’Neal was born on September 26, 1927 in Ocala, Florida. Of Irish decent he was dark, dashing and coldly handsome with intense, penetrating eyes, Patrick O'Neal was known for walking that fine line between elegant heroics and elegant villainy during his five-decade career. He served toward the end of WWII with the United States Army Air Corp and, in his late teens, was assigned to direct training shorts for the Signal Corps. A graduate of the University of Florida at Gainesville, he subsequently moved to New York and continued his dramatic studies at the Actor's Studio and Neighborhood Playhouse.


O'Neal made an initial impact in the early 1950s when he replaced Tony Randall in the hit Broadway comedy "Oh, Men! Oh, Women!”. Following a strong role in "The Far Country" (1961), he gave a superlative portrayal of the defrocked Reverend Shannon opposite Bette Davis and Margaret Leighton in Tennessee Williams' "The Night of the Iguana" later that year. Unfortunately for him, Richard Burton collared the role in its 1963 transition to film, “The Night of the Iguana” (1964). The attention nevertheless earned O'Neal both lead and support roles on camera, but most of those performances would be routine and, for the most part, overlooked. A capable actor used regularly in 1960s films and 1970s television, he was usually cast as either a rugged trooper in the action adventures “King Rat” (1965) and “Assignment to Kill” (1968); a careerist sycophant in the naval spectacle “In Harm's Way” (1965); or as a flashy murderer in such gruesome yarns as “Chamber of Horrors” (1966), probably his best known film. O’Neal appeared in one Euro-western, 1969’s “El Condor” with Jim Brown and Lee Van Cleef. In later years, it was almost strictly television movies and guest spots. His wife and brother owned several restaurants with him. He died on September 9, 1994 from respiratory failure while battling tuberculosis. Today we remember Patrick O’Neal on what would have been his 85th birthday.