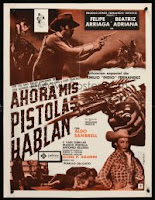 An old man tells a group of children a story. A band of thieves steals some gold and gives it to Buck, one of the gang, to hide with his wife Camilo. Tomas, leader of the group, does not like this man because he married the woman, Camilo he wanted for himself. Tomas sets a trap and the police arrest Buck, but he has hidden the gold coins. Upon leaving jail the gang interrogates him to reveal the whereabouts of the loot. Saying nothing Don Tomas cuts out his tongue. Years later Camilo returns for revenge.

[When I interviewed Aldo Sambrell in 2002 and asked him about “Now My Pistols Speak” He recalled, "This film was offered to me by Pedro Rivera, a producer friend, after I had finished “Mundo verde”. He told me that I would have everything I had received for the other film and convinced me to do it. We started the movie and I think that we spent about $650,000 which was an excessive amount. No one said anything when it was done. It was a little movie but we had the great Emilio Fernandez. He drank a lot and was a very violent man, hard to bear, especially since he was dangerous when he got drunk and usually had a gun in his waistband. He always dressed in charro outfits and the gun. I was in charge of keeping him out of any fights and I had to treat him with great care. But nevertheless he was a very smart guy who grew up with a tragedy in this film and that has stuck with me. The Master of Arms was a friend of mine, Antonio Iglesias "El Lobo" who was an athlete, a wrestler, that I have much affection for. One day there arrived on the set a Colombian weapons specialist and began to play with some of the guns. One of these, had a bullet, and he shot and hit my friend in the eye. He thought it was empty. We called an ambulance and took him to the hospital. He lost his eye and it was replaced with a glass eye. It was tremendously sad.”]