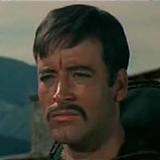 Born Francisco Martínez Celeiro in Barcelona, Spain on September 18, 1937 he became a star in Spanish films as George Martin. As a youth Martinez excelled as a gymnast and was a member of the 1950 Spanish National Olympic Team. He narrowly escaped death when he missed the team plane and it later crashed in the mountains of Valdemeca killing all on board. Because of his good looks he was offered a screen test and passing was given a part in “Nunca es demasiado tarde” (1956). His first Euro-western role was as Roscoe in “Apache Fury” (1964) where he was billed as John Martin. This led to appearances in eighteen Euro-westerns. Martin then branched out into directing and producing, leaving the film industry in 1975. Today he lives in Miami, Florida where he is a land developer. Today we celebrate George Martin’ 75th birthday.