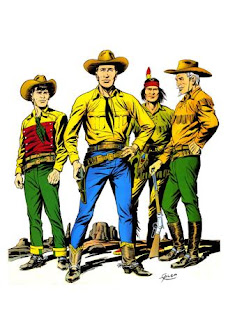 The long ride of Sergio Bonelli

A beautiful Italian history, very Milanese: a passion for his job that coincides with a passion for life (and adventure), the work that is handed down from father to son, not without certain nuances of Freud, and the father and the son were still capable of being moved, more than octogenarians, in front of a ring or an old comic strip. Yes, perhaps eternal childhood, is the primary characteristic of the Bonellis, Gian Luigi and Sergio. And, with their inexhaustible curiosity, have contributed greatly to make their name synonymous with clouds and ink, and not only in our country.

TO BE PRESENTED AT THE MILANO FILM FESTIVAL - almost a year after the death of Sergio, you can now see the beautiful documentary by Giancarlo Soldi, " Come Tex nessuno mai” which will be presented at the Milan Film Festival Thursday, September 20, and 21, at Sempione Park. We give an extract here with an exclusive preview in which Sergio recounts the early pioneering craft and the publishing house: in the film there are all those who have contributed to making the name Bonelli, by the inventions of Dylan Dog and Martin Mystere respectively Tiziano Sclavi and Alfredo Castelli designers Corrado Roi and Claudio Villa, as well as Bernardo Bertolucci and Ricky Tognazzi and many others, all pay homage to their friend rather than their employer.

For sure Tex Willer, the granite truth of Gian Luigi and the most human and doubtful of Sergio, seems to be the undisputed protagonist of the film, able to last for sixty years and three generations, "More of the epic that tells, the story of the West." But Tex (of which you can tell with the first statements, even when the balloon was seen as the devil in society moralizing Italy in the 50s) actually is none other than the alter ego of his father, Gian Luigi before and then Sergio. That as a child he dreamed of "entering into books," as he had seen in an old story of Mickey Mouse. He succeeded, and thanks to his paper heroes, we did a little too.