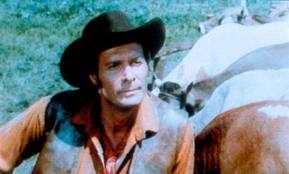 Frederick Edwin Beir was born in Niagara Falls, New York on September 21, 1927. Beir’s first film appearance was in “Border River” (1954). Failing to make it as a film actor he developed a long career of television guest appearances during the 1950s-1970s. He then became one of TV’s busiest actors, appearing in dozens of adventure, detective and western series episodes. His versatility allowed him to portray characters on either side of the law on crime dramas and he was also effective at light comedy roles. In the mid-1960s Fred tried to follow Clint Eastwood to stardom by appearing in two early Spanish produced westerns “Three Dollars of Lead” and “The Return of Clay Stone” but both failed to catapult him to much fame other than just another unknown American actor in a Euro-western. Fred returned to guest roles on American television before finally landing a regular role on the TV soap opera “Days of Our Lives” as Larry Atwood from 1977-1978. Fred was married to actress Sheila Wells from 1967-1969. They had a daughter named Amanda Tate Beir who was born in 1969. Fred Beir contracted cancer and died on June 3, 1980 in Hollywood, California. He was only 52. Today we remember Fred Beir on what would have been his 85th birthday.
Posted by Tom B. at 5:31 AM