NOW THEY CALL HIM SACRAMENTO 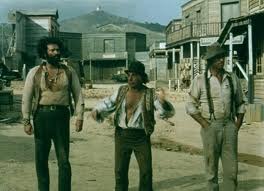 Sacramento, Jim and Jim's father Tequila get into a fight with a gang of outlaws planning to rob a shipment of gold from a train. Believing the money belongs to the government they take it for themselves but the cash actually belongs to a community of farmers who now face eviction from their land. It seems that the outlaws that the trio outsmarted were working for a crooked banker, Cray, who is attempting to take control of the farmers' land. When he discovers that the farmland is inhabited by a colony of beautiful women who have left their husbands because they refused to stand up to the banker's bullies, Sacramento tries to make amends. However, Tequila runs off with the money and Cray sends his thugs after Sacramento and Jim. In a dramatic ending the entire town is destroyed in a series of explosions.


[The explosions at the end of the film were planned to destroy the Balcazar film set as it being torn down at the time this last western was being filmed. Therefore they were able to use the impressive explosions in the film and bring down the buildings for demolition at the same time.]