AND DEATH FOLLOWED HIM at Sitges Film Festival

“Y la muerte lo seguía” (And Death Followed Him) by Gómez Angel Hernandez, has been selected by the International Film Festival of Fantasy and Horror in Sitges (Spain) to compete in the official section of short films. The recently titled  film director in the Center for City of Light, Angel Hernandez Gomez is emerging with future promise in the national film industry.

Despite his youth, he has received many awards among which the Best Short Film Award at the South African International Horrofest in 2011 received Touch of Light. For the second consecutive year, will be present at the Sitges Festival where last year he competed for the Silver Méliès with his short film “La última victim” (The Latest Victim). 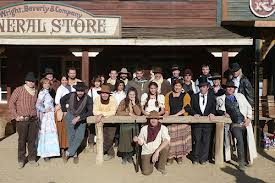 This short film, in which crew was also helped by other students of the Center for City of Light, is based on a novel by Angel Gomez Rivero, the film director's father, whose big screen adaptation has resulted in a merger of the two genres that matter most to Ángel Gómez Hernández: the western and terror. According to the director, "The greatest originality of this film is that it is a horror film told in western format. The plot suggests an interaction between the real and the imaginary, which functions as a catharsis for the main character."

In mid-October will begin a tour of Spain, showcasing a trilogy of short films by Angel Gomez that pays homage to classic monsters of film history and literature such as: the werewolf, vampires and Frankenstein.

In November will start a tour of Spain that will show fans of horror movies the last work of Angel Gomez “And Death Followed Him”. In Alicante, on November, 30th at the Center of Studies City of Lights. After the screening of the film a round table will be held with the participation with some of the supporting actors of the director's short, and other students Studies Center who participated in the filming of it.

And Death Followed Him

Story: Young Johnny is told a strange story told by an old Indian in the light of a campfire. The story tells of the misadventures of Fred Carlson searching for the murderer of his wife. A chase that lasts two years and ends in a mysterious town called Arkham.