ON THE THIRD DAY ARRIVED THE CROW 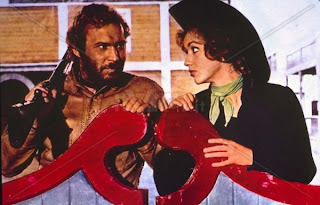 The Connelly brothers are looking for a gunman named ‘The Crow’, “the meanest son-of-a-bitch this side of the Rio Grande “ and who is responsible for killing their father. While looking for him, they find a load of gold which turns out not to be a load of gold and are confronted with bandits who want their gold back. The meet a man with a hoard of mentally deranged sons, and must face a bad guy who wants to kill them. After three days the crow still hasn't arrived. Finally arriving in town is a black-clad figure whose promptly killed by the Connelly brothers.