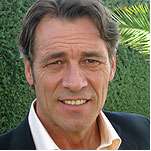 Spanish actor José Conde, who had been missing for a month, was found dead last Friday February 25, 2011 in an abandoned building near his home.

Lively and energetic, the actor was widely known for his many supporting roles in numerous films and television series for more than two-decade career. He was 56 years and among his works include roles in TV series such as “Sin Tetas no paradise”', ”Family Doctor”, “Central Hospital 'or' central Brigade". He had also recently appeared in “Time for Jose Mota” and “23-F: History of a betrayal”. Conde had been under going treatment for depression. Conde appeared in one episode “The Pact”, of “Queen of Swords” as Don Miguel in 2001.
Posted by Tom B. at 9:05 PM