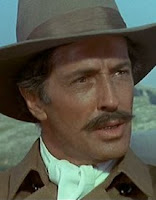 Actor Farley Granger, best known for his starring roles in two Alfred Hitchcock films, "Strangers on a Train" and "Rope," died Sunday of natural causes in New York City. He was 85. Granger also appeared in two other noir films of note, both co-starrring Cathy O'Donnell: Nicholas Ray's "They Live by Night" and Anthony Mann's "Side Street." He later made a great many appearances on television, including stints on several soap operas. He also had a significant legit career, appearing on Broadway in "The Seagull," "The Crucible," "The Glass Menagerie" and "Deathtrap." In 2007, Granger published a memoir, "Include Me Out," in which he freely discussed life with his partner, Robert Calhoun, and as a bisexual in Hollywood. Calhoun, a producer on CBS' "As the World Turns," predeceased him about three years ago. Granger leaves no immediate survivors. Farley appeared in two Euro-westerns “They Call Me Trinity” (1970) as Major Harriman opposite Terence Hill and Bud Spencer and “The Man Called Noon” (173) as Jusge Niland opposite Richard Crenna.
Posted by Tom B. at 6:36 PM