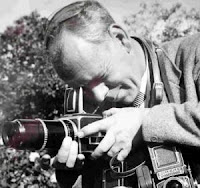 He may not be a household name himself, but photographer George Courtney Ward worked with some legends in his time.

George, who died at his home in Westbourne on Tuesday, February 15, aged 93, photographed some of the most famous names in cinema during his 30 years working at Pinewood Studios in Buckinghamshire.

Dirk Bogarde, Michael Caine, Frank Sinatra, Lauren Bacall, Alec Guinness and Kenneth More were just some of the screen stars in George’s portfolio. Ward was the still photographer on Dirk Bogarde's 1961 Euro-western "The Singer Not the Song".

George was born in Christchurch in 1917 and grew up in the town before becoming a stills photographer at Pinewood. At first he commuted, but shortly moved to Fulmer in Buckinghamshire with his mother and aunt.

After more than 30 years working at Pinewood, George moved to Elstree studios in 1969 when the photographic department was closed down. But when that studio was taken over in 1972, he decided to sell his house, retire and move back down to Bournemouth.
Posted by Tom B. at 3:18 PM