THE FURY OF JOHNNY KID 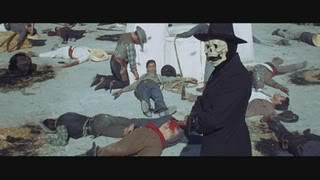 Romeo and Juliet out west, with the Mexican and Gringo families of the Monters and Campos filling in for the Montagues and Capulets of the original Shakespearean play. The two families hatred and antagonism for each other manifests itself in murder and ambush during which both sides show themselves as not having any sense of restraint or mercy. The Campos, and in particular the eldest son Rodrigo are shown to be particularly ruthless in their endeavors and they are also aided by the assistance of Sheriff Cooper. Meanwhile Johnny Monter, meets Giulietta Campos while robbing a stagecoach with his one handed friend Lefty and takes a liking to her. They are expecting the coach to be carrying a treasure belonging to the Camposes and while they don't find it, the beautiful young maid more then makes up for it as far as Johnny is concerned. The pair meet up again during a raid Johnny makes on the Campos' ranch during which Senor Campos announces his daughter's engagment to Sheriff Cooper. Giulietta is not at all pleased with this arrangement and once an opportune and secret meeting takes place with Johnny the couples' mutual infatuation is complete and their minds are made up to be together. On learning of this the local saloon girl Roselyn, who held the previous affections of Johnny, tells their story to Rodrigo in a fit of jealousy. Johnny is subsequently captured and jailed but Roselyn takes pity and helps him escape, losing her own life in the process. The stage is now set for a final showdown as Johnny attempts to free Giulietta from her father's house and the Mounter’s embark on an all out assault on their enemy's stronghold. The ending differs as to which version of the film you see. One they all die, the other the young couple escapes the slaughter and ride off.