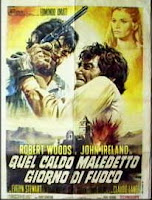 Two years after the outbreak of the Civil War, Richard Gatlin, founder of the first machine gun, offers his invention to the Federal Government. President Lincoln has sent to Las Cruzes, New Mexico, a secret commission to meet with him and take him and his weapon to Washington. During the night, two gunmen kill three members of the committee and kidnap Gatlin. The Federal Government, convinced that a secret service agent has revealed the meeting, blames and condemns to death the agent Captain Chris Tanner, but Pinkerton, the chief of the famous private detective agency, is convinced of Tanner’s innocence. By switching the imprisoned Tanner with an imposter Jeremiah Grant, he is freed and given the task of ascertaining the truth. After many adventures, he discovers that Gatlin and the machine gun are in the hands of Tarpas, a Mexican bandit, and Rykert, a member of the secret committee, who has faked his death. The plan of the traitor and his associate is to sell the weapon to the Southerners and ransom Gatling to the Northerners both in exchange for one million dollars each. But Tanner steps in and after a fierce gun battle manages to get the better of the two dark figures. He frees Gatlin and recaptures the weapon.

*When I asked Robert Woods about “Gatling Gun” at the 1st Los Angeles Spaghetti Western Festival he said, “I remember ‘Gatling Gun” because my name meant something at that time, Fida Films (Dr. Amati) gave me carte blanche to cast it, find the director and do it. I had worked with Paolo Bianchini on a modern film called “Hypnos - A Day Of Massacre” and I liked his work a lot, so I requested that he write the screenplay for and direct “Gatling Gun”, with Amati's blessing. I got John (Ireland) to do 'Tarpas'. John and I had done a couple of other films together including, “La sfida dei MacKenna” (“Amen”). John and I were very good friends."

YouTube link: http://www.youtube.com/watch?v=XXlDM35Xifk
Posted by Tom B. at 6:21 AM