Franco & Ciccio on the Warpath 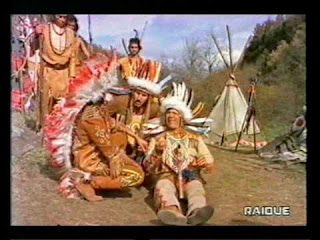 Franco and Ciccio, two soldiers in the Sicilian army, are forced to flee by the arrival of Garibaldi. The two smuggle themselves out of Sicily by lying in coffins being exported, the two friends are shipped to America, where they find themselves lost and without money. They enlist in the U.S. Army and are sent west to the fight Indians, despite their stupidity they are able, by a series of fortuitous circumstances, to cause the defeat of the Indians and their final surrender. Things seem to get the best for Franco and Ciccio, but the sudden discovery of a wrong doing forces them to abandon their enlistment in the army and they find refuge in the desert. To put an end to their troubles, the two hapless friends agree to marry the daughters of an Indian chief and to integrate into an American Indian tribe.