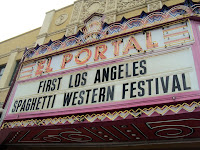 Riek Glady’s, Chris Casey and I arrived at the El Portal Theatre at 8:00 a.m. We all set up tables and chairs for the actors to sign autographs and sell photos, posters and stills. Wild East put up posters behind each actor's table showing one or more of their Spaghetti westerns. I went back stage and was given instruction by Mr. Stafford on how to use the microphones and chairs for the Q&A sessions and panel interviews.

Fans started arriving by 9:15 and were let in at 10:00 a.m. At 10:30 “Gatling Gun” supplied by Dorado Films starring Robert Woods was shown. After the film concluded I conducted a 10 minute interview with Mr. Woods and 5 minutes were given to audience questions and answers. A half hour break in the action followed where fans could return to the lobby and talk with the actors mingle amongst themselves and buy autographed photos. By this time Michael Forest had arrived and soon followed Mark Damon.

At 1:15 p.m. “Dead Men Don’t Count” with Mark Damon was shown and was followed by another Q&A session with Mr. Damon. A problem arose when Mark said he hadn’t seen “Dead Men Don’t Count” since it was made and remembered little about the film. He did talk about Anthony Steffen and then asked the audience why they liked Spaghetti westerns. The audience replied and we had a very nice discussion. 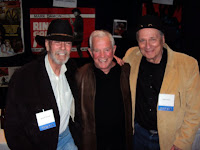 Robert Woods, Mark Damon, Brett Halsey
At 3:15 p.m. "A Fistful of Dollars" was shown and by now Hunt Powers, Brett Halsey and Edd Byrnes had arrived with much discussion between the actors and fans. After the conclusion of “A Fistful of Dollars” we set up the stage with 7 chairs as Edd Byrnes had decided to leave. I thanked certain people for keeping the genre alive: Tim Ferrante “Westerns... All’Italiana” editor, Bill Connolly, who was present, for “Spaghetti Cinema”, Eric Mache and Ally Lamaj, of Wild East, Ulrich Bruckner and KOCH. John Nudge for the Spaghetti Western Web Board, Sebastian Haselbeck of The Spaghetti Western Data Base, authors Sir Christopher Frayling, Tony Williams and Laurence Staig and Howard Hughes. I thanked the late Don Bruce for his ‘Then and Now’ photos. Last I thanked John Antoniou for putting the Festival all together. 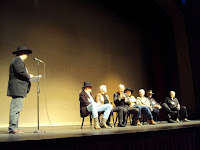 Since we had 7 actors remaining there was no way to ask them specific questions about themselves so I asked general questions. "What was it like to live in Rome and make films during the 1960s. I asked Richard Harrison to lead off since he had been their the earliest of the group. Well that went on for a good 20 minutes with them talking about how wonderfully they were treated and how it was one long party. Each one talked about their lives in Rome and how they were hired and brought over to make a film and stayed. I then asked them doing their own stunts and again they relived falling off horses, getting cut and hurt during fight scenes as all wanted to appear as macho heroes and paid the price. Mark Damon told of falling off a horse and breaking a disk in his neck. Richard Harrison told of a time he was asked to throw a tomahawk at a group of people he was chasing and when he stopped the action twice was asked why he didn’t throw it. He said because he would have hit someone only to be told, "Don’t worry they’re only extras." Brett Halsey told of trip wires used to bring horses down and the fearlessness of the Italian stuntmen. After that the audience asked questions. We concluded the panel and the audience gave the 7 actors a standing ovation. The actors then stood and applauded and thanked the audience for remembering them so fondly. 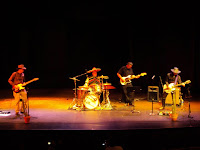 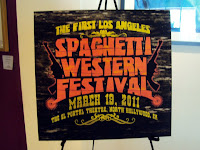 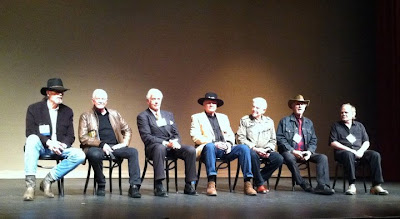