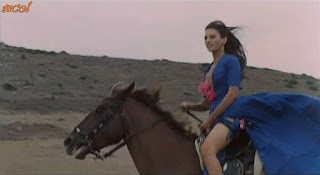 On the border of Mexico during the revolution against the French of Maximilian, a stagecoach with a young woman Lulu and a French soldier escape from the revolutionaries. They are attacked by a bandit known as "Red", but the woman, with his gun, flees. She takes lodging in the hotel and here, she shows of her skills as a poker player with her tricks she always manages to win. Meanwhile, the smuggling of weapons to the revolutionaries, continues with the help of " Red". The shipments are soon prevented by a young Frenchman, cleverly disguised as a Mexican. The Frenchmen and meets Lulu and they fall in love. He asks Lulu to stop playing poker and cheating, and asks her to live a quieter life with him. But shortly after the young man dies, accidentally killed by a revolutionary. Upset the woman faces "Red" and kills him, then resumes her work as in the past.