Who Are Those Guys? ~ Roger Cudney 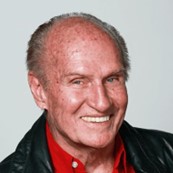 Roger Cudney waa born in Cleveland, Ohio on June 22, 1936. He was a small man with a receding hairline and a gleaming smile and may have been the most notorious gringo in Mexico. Some Mexicans know him as a plunderer of ancient archaeological treasures. Others remember him as the union-busting manager of a sweatshop. Still others recognize Mr. Cudney as a pathologically nasty Texas ranger or a meddling diplomat.

Mr. Cudney has been all of these things and more in a 30-year acting career in Mexican TV and movies. The Ohio-born Mr. Cudney came to Mexico in the 1960s to play the lead in the musical “Show Boat” but he soon found a different dramatic calling. "Roger Cudney is the epitome of the bad gringo, a blending of all the worst American stereotypes," says David Wilt, who compiled the Biographical Dictionary of Mexican Film Performers.

On the [2001] Mexican soap opera, ‘Amigas y rivales’ (Friends and Rivals), Mr. Cudney was a racist South Texas rancher who caught a couple of illegal Mexican immigrants trespassing on his property, shortly after the World Trade Center attack. "Git off of my land," the actor snarled, waving a shotgun. Then, in his distinctively accented Spanish, he ad-libbed: “Thousands of Americans have just died in New York. They shouldn't let anyone enter my country anymore.”

Cudney also had parts in mainstream Hollywood films, including a co-starring role opposite Charles Bronson in “The Evil That Men Do”, “Total Recall”, “Rambo: First Blood Part II”, the James Bond film “Licence to Kill”, “Julia”, “Perdita Durango” and “Original Sin”. He portrayed the part of the United States Ambassador to Mexico in “La Dictadura Perfecta”.

Cudney was married, with three sons and one daughter.

He died on July 5, 2021 in Mexico City, of a heart attack following a car accident.