Today marks the 50th anniversary of the premier of “Watch Out Gringo Sabata Will Return” directed by Alfonso Balcazar under the pseudonym Al Bagran and starring George Martin, Victor E. Richelmy, Fernando Sancho and Daniel Martin. The film tells the story of a Mexican named Carrancha (Sancho) who is involved in a stage coach robbery with a bandit named Luke Morton (Daniel Martin) and like Luke wants the whole box of gold for himself, knowing that Luke Morgan will kill him for his share he hides the money in a cemetery in a grave. Luke not knowing that Carrancho has hidden the gold, shoots him to get his share of the $150,000 and leaves him for dead. On the stage a beautiful mysterious woman was travelling, and Luke takes her along after the robbery, Chica (Rosalba Neri) as the woman is called as a trophy for Luke and he plans on sharing the gold with her and her alone. A man named Rayo (George Martin) rides into the town where the stagecoach was robbed and sees a gallows being erected for a hanging. After garnering some information he sets out to free the man (Luciano Rossi) who's awaiting his date with the hangman after being the only man caught after the robbery and murder of the Calvary guards who were accompanying the shipment. Rayo diverts the sheriff and deputies with some dynamite and helps the bandit escape. Once well out of town Rayo questions the bandit about the whereabouts of Luke Morton. The bandit says he does not know anything, Rayo says " though I admit the stretching of a man's neck is a spectacle I find depressing, your still a murderer, you must be punished, bet I'm faster than you," and when he's tossed a gun and challenged to a duel by Rayo he flatly refuses, but once Rayo turns his back he goes for his gun to shoot Rayo in the back, Rayo sensing this spins and the bandit is shot dead. A bounty hunter named Texas (Vittorio Richelmy) sees some vultures circling and investigates and finds Carrancho unconscious from his gunshot wound but still very much alive and helps him recover a bit. While sleeping Carrancho steals Texas' horse and rides off attempting to claim his buried gold but is foiled by a funeral party and rides into town only to run into an angry Texas. Some of Luke's men have come to town to take Carrancho (Luke has figured out he's not dead) back to Luke for some questions. One has a bead on Texas from the back and as he aims to shoot, he is shot down by Rayo who has entered the fracas. This starts a whole secession of double crosses played by the Texas, Rayo and Carrancho characters on each other as they tentatively help and try to eliminate one another in pursuit of the gold.

Luck Morgan You Won’t Get That Gold – English title 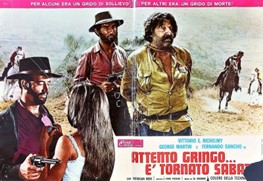