We continue our search for film locations for “The Mercenary”. Paco is taken prisoner and buried in the sand up to his neck. We see him sings ‘La cucaracha” as horses ride around him. A cavalry sergeant orders his group of cavalry to march. Suddenly Paco’s head disappears down the hole. We then see him pulled out from behind a wall by two peons who have dug a tunnel under him and rescuing him. The three men then run for the hills. 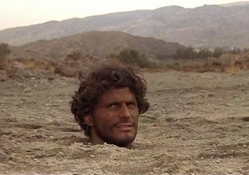