[In almost all the films, as well as the sets, he also took care of the costumes, such as the epic poncho worn by Eastwood in A Fistful of Dollars . Also by his hand the sketches for The Good, the Ugly, the Bad.]

[The costume created by Simi for Claudia Cardinale in Once upon a time in the West, one of the few female characters in Leone's films, exhibited at the Cinémathéque Française in Paris.]

[Carlo Simi, drawings for the buildings of El Paso in “For a Few Dollars More.] 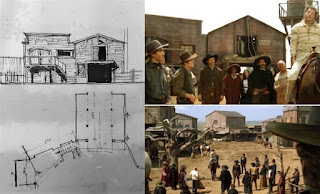 [Simi's drawing of the western village constructions in Eli Wallach's hanging scene in The Good, the Bad and the Ugly.] 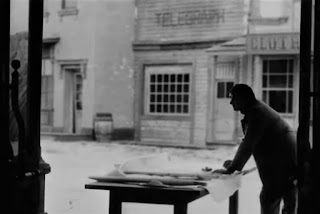 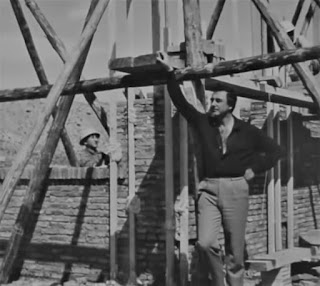 [Above: Carlo Simi on the set under construction (Almeria 1965). A relationship of fraternal friendship was established between the architect and Leone and Simi will also design the villa in via Birmania at EUR for the director.] 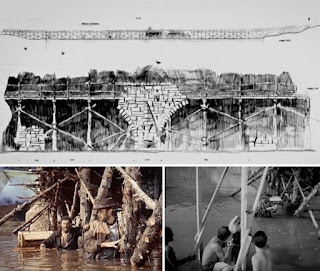 [Simi's sketch for the Langstone Bridge attack scene in “The Good, the Bad and the Ugly”. Eastwood during filming.]

[Simi's assistant set designer in this film was the Piedmontese Carlo Leva , also a great friend of Leone. It was Leva who prepared the sketches for the Sad Hill Cemetery following the director's instructions; and it was he who identified the valley in which to reconstruct and set the scene of the final duel, which is considered by many to be one of the most beautiful in western cinema of all time. Below: the first version dated 1966 and signed Carlo Leva on the lower right.]

[Simi's sketch for the Sweetwater train station in "Once Upon a Time in the West..]