Who Are Those Gals? ~ Mary C. Cumani 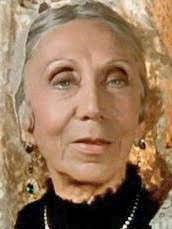 Maria Clementina Cumani was born in Milan, Lombardy, Italy on May 20, 1908. She was active as a dancer from the mid -thirties and was a student of Jia Ruskaja. Author of her own original choreographies, she decided very early to dance interpreting only compositions of her own creation.

In June 1936 she met the poet Salvatore Quasimodo [1901-1968], who fell in love with both her elegant beauty and her lively artistic talent. They had a son, Alessandro  [1939- ]. After troubled and alternating events, Cumani married the poet in 1948. Cumani was essentially the poet’s muse, and above all a precious collaborator: she would have helped Quasimodo in the translation of the Greek lyrics but above all of Neruda’s poems. After a complex and torturous married life, the two legally separated in 1960. His son Alessandro, then twenty-one, was entrusted to his mother.

She was also very active as a film actress where she participated in films such as Giulietta degli spiriti (1965), Federico Fellini , Medea (1969), Pier Paolo Pasolini , The Tenant of the Upper Floor (1978) by Ferdinando Baldi , and other important films directed by directors such as Lina Wertmüller, the Taviani brothers and Roberto Rossellini. Although she was long separated from her husband, she used the surname Quasimodo in many cases.

In 1981 she published a critical essay on dance, followed by a collection of poems Improvviso un vento. After a long artistic break, in which she devoted herself to teaching, Cumani returned to dancing: in 1986 she was the first dancer in the opera Fedora by Umberto Giordano, staged by Giancarlo Cobelli at the Verona Philharmonic Theater .

In 1995, a few months before her death, a volume was published by Spirali that collects diary pages, letters addressed to Quasimodo and poems by Cumani with the title The Art of Silence. Dance. Poetry. The Picture. Finally, in 2003, thanks to her son Alessandro, a collection of her poems was published posthumously by the publisher Nicolodi, entitled O Perhaps Everything Has Not Been.