50th anniversary of the premier of “Pistol Packin’ Preacher”.

Today marks the 50th anniversary of the Italian comedy western “Pistol Packin’ Preacher”. Directed by Leopoldo Savona and starring Mark Damon, Richard Melville (Rosario Norelli), Pietro Ceccarelli and Veronica Korosec. The film tell the story of Neapolitan Jeremiah (Pietro Ceccarelli), a pizza peddler, and Slim (Mark Damon), a wanderer with a fertile imagination to steal from the country squire, Goldwater (Richard Melvill) a treasure which he has obtained through criminal means and has hidden. Sacristan (Ugo Fangareggi) disguised as a priest and who, with the help of Slim, fakes two miracles. Jeremiah tries to induce Goldwater, who is aware of the harm he has done, to confess where the treasure is. The attempt fails so it is up to Slim and Lucy (Veronica Korosec), one of Jeremiah’s two daughters, to achieve their goal. Meanwhile, however, Goldwater is suspicious about the true identity of the strange priest and orders his men to eliminate him. Jeremiah is saved by Slim but pretends to be dead and later reappears as the ghost of himself which terrifies Goldwater, causing him to reveal the hiding place of the treasure, which is then found. Jeremiah and the others, however, do not get to enjoy their bounty, but are forced to give it to the people of the town.

Leave Your Guns at the Door – English title 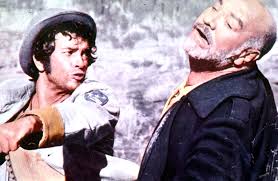