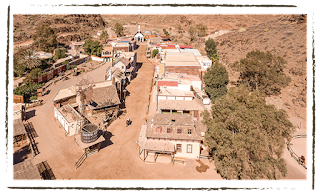 It has been announced that the only wild west theme park on the island will be closed for the rest of this year. The filming of a new Amazon Prime “Mega-Production”, which looks set to renew and rejuvenate the famous 1920s franchise of Zorro, has begun pre-production and will shoot an exclusive ten-part series around the famous rapier wielding defender of El Pueblo de Los Angeles. There is much history behind this latest location for incoming Hollywood productions, and its great to see the ghost town’s waning fortunes possibly reinvigorated, with the prospects of reaching streaming audiences worldwide.  There is much to celebrate!

The reboot series of “Zorro”, from Los Angeles-based Secuoya Studios and John Gertz, will stream exclusively on Amazon’s Prime Video in the U.S., Latin America and in Spain.  It will star Miguel Bernardeau (Guzmán in Netflix smash hit “Elite”) and Mexico’s Renata Notni, as Secuoya Studios flagship series offering a modern take on the hero, directed by Javier Quintas, whose credits include episodes of “Money Heist” and “Sky Rojo,” alongside Miguel Angel Vivas, who worked on “Locked Up” and “Unauthorized Living.”

The 10 episode series is written by Carlos Portela (“Hierro,” “Velvet Collection”),  and executive produced for Secuoya Studios by David Martínez, David Cotarelo and Angela Agudo, joined by John Gertz, founder of Zorro Productions and a producer on “The Mask of Zorro” and “The Legend of Zorro” movies, working alongside former Sony exec Andy Kaplan at KC Global Media, Sergio Pizzolante for C&T Mobs, and Jesús Torres and Glenda Pacanins at NoStatusQuo Studios.

The series, according to Variety, is set to shoot, what Martínez, Secuoya Studios head of fiction called “the most important Hispano American hero of all times and adapting him for a new generation,” using various locations across The Canary Islands.  He added: “To do this, we’ve been lucky to count on Prime Video, the best partners possible for this journey, to form both a cast which is a luxury as well as the best creative and production team in the industry.” Aiming to create an “up-to-date” vision of this legendary character who since the earliest times of film making in the 20th century has long been “a symbol of justice and defender of the oppressed.” The production “perfectly takes in the diversity of an emerging world in which different races try to live together,” Secuoya Studios said at their unveiling on Friday.

It looks like, half a century after its creation, and just over one hundred years since Johnston McCulley’s dashing vigilante Zorro was first imagined and brought to life on the silver screen starring the legendary Douglas Fairbanks, Sioux City will now become the original Pueblo de Los Angeles,  endowed with a new, and much deserved, coating of star dust to carry on shining as a beacon to the world from this small sub-tropical island off the coast of Africa.  A fantastic newly rising star for Gran Canaria’s film production and tourism industries alike.