We continue our search for film locations for “The Mercenary”. After Paco’s escape the scene switches to introduce Curly played by Jack Palance playing poker. A player throws in some money and lays down his cards which has 4 Jacks. Curly lays down his card and says 2 Ladys (Queens) and two more, referring to the two saloon girls at his side. The first player objects and Curly pulls out a small handgun and takes the pot. 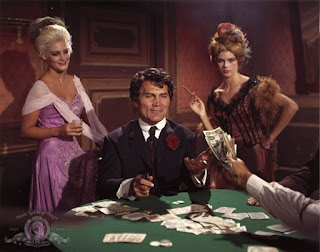 This scene would have been shot on a sound stage in Madrid.