Who Are Those Singers & Musicians ~ Joseph Allegro 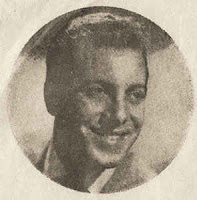 Joseph Allegro remains an enigma as I can find little to nothing about him. Joe as he was called sang with several orchestra's including Morty Craft and his own band Joe Allegro and His Rockers. He recorded under such labels as Teller House, RCA Victor, and Ronnex Records, Mohawk, Cham, End, Wizz, Laurie and Libert from the early 1950s to the mid 1960s and a single recording in 1976.